Motz taking to the air to reach festivities 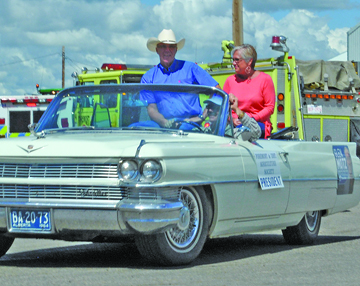 Photo by Jamie Rieger - Medicine Hat-Cardston-Warner MP Glen Motz, pictured here with his wife, Sue at the Foremost parade on June 15, is going to get out to as many communities in his riding as possible to help celebrate Canada Day festivities on July 1.

By Trevor Busch
Southern Alberta Newspapers
Medicine Hat-Cardston-Warner MP Glen Motz will be criss-crossing the riding on wings July 1 in order to grapple with the geographic distances involved with his constituency, which stretches border to border across the southern reaches of the province.
“It will be a busy day. Given the size of my riding and the committments that I have, I’m leaving Medicine Hat very early that morning to fly to Lethbridge, to drive to Raymond to take part in their Heritage Day Parade and pancake breakfast. So I’ll be there for that nice and early.”
It will then be back to the plane to return to Medicine Hat to participate in the city’s festivities.
“Then I’ll fly back to Medicine Hat to take part in the Canada Day events and the big celebrations they have here, the welcome and the opening ceremonies for that,” said Motz. “So that’s it — I’ll try to take in fireworks along the way, and try to make it out to Redcliff as well, I know they have some activities going on out there and I’ll try and make it. Unfortunately, I’m a big guy but there’s only so much of me to go around apparently.”
Always an extra special event, Motz didn’t want to miss Raymond’s Canada Day celebrations in 2017.
“July 1 is Raymond’s big day — their biggest day of the year — I thoroughly enjoyed it last year, and I want to represent the people all across the riding, so I want to try to be as many places as I can. They’re a priority for me, certainly in the morning.”
Motz will be attending multiple events in multiple communities throughout the summer months — and still plans to fit in a holiday for himself.
“It’ll be a crazy summer, but I love meeting new folks, and people around the riding, so it will be a great opportunity.”