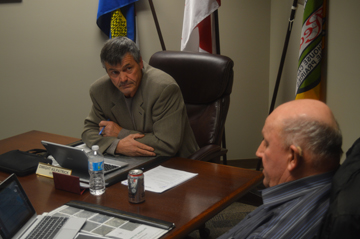 Redcliff town council voted by a razor-thin margin at its Feb. 26 meeting to oppose a motion in favour of curbside recycling supported by Mayor Dwight Kilpatrick.
The 4-3 vote was also supported by councillors Cathy Crozier and Eric Solberg.
The contract negotiated with Can Pak to introduce curbside recycling and garbage collection would have saved the town 7.7 per cent in costs during its first year, raising to 22 per cent by 2028, according to figures provided by administration at the previous meeting.
Coun. Larry Leipert, who was the first to speak against the recycling proposal, dismissed these figures as “a lowball price.”
He said the vast majority of his constituents he spoke with wanted to retain the current system.
Coun. Chriz Czember, who told the Courier he was on the fence until the afternoon of the vote, said although he opposes this particular proposal, he wants to see recycling come to Redcliff sooner than later.
“A lot of residents tell me that they’re willing to spend a few more dollars for it,” he said. “If that makes more people happy, I’m fine with that too.”
Czember said his major concern with the contract was it didn’t sufficiently address the issue of composting, but also added that many of his constituents feared such a major change to trash collection.
“This is a big, drastic change real quick. (It was) very shocking to people,” he said. “If we can go about it more subtly, even in a few years go to this system, I’d be OK with that.”
Crozier said she used the opportunity at the previous Alberta Urban Municipalities Association meeting to speak with representatives from other municipalities on their experiences with introducing recycling.
All the other municipalities began with a centralized recycling depot, only to replace it with curbside at an increased cost.
“They started out with the depots and abandoned them, because to have recycling, you have to mail it, you have to store it, and then you have to try to sell it,” she said. “A lot of them were selling it, but at a loss.”
Solberg said he can relate to residents who are attached to their current back-alley garbage bins, but that it’s more important in the long term to modernize the system by adopting curbside recycling.
“I’m 100 per cent for recycling,” he said. “If the community, as it stands, wants to pay more to keep their waste bins and to not force people to recycle, it will have an impact.
“Our impact will be on the environment, will be on the community and will be on future residents.”