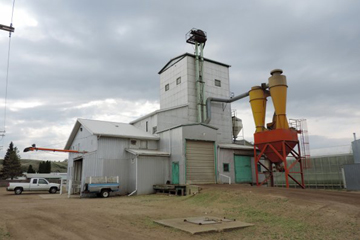 In front of a packed council chamber, Cypress County councillors listened to people who were for and against Laverne Gill’s proposal of selling a section of his land for reclassification to possibly have the a new 11-22 Seed Plant setup shop near Highway 41A, two kilometres east of Veinerville, at its May 15 meeting.
L. Gill Ventures Ltd., had submitted an application 18/AO3 to reclassify a 7.51 ha (18.55 acres) parcel from Agricultural IDP District 1 (A-1 IDp) to Industrial District.
Letters of concern were sent into the county addressing the devalue of surrounding properties, increased truck traffic with heavy trucks, increased dust and road access being inadequate.
“If this development had any increased dust, weeds, noise, any of those items that they feel are issues, we wouldn’t have agreed to this in the first place because those things are important to us as well,” explained Gill to council.
“We have a house right directly east of the property that would be closest to the development. We wouldn’t jeopardize that property with some of the concerns that have been raised. We feel this development is completely agricultural related.”
“It’s absolutely a good fit. The area’s needed an upgrade to the seed plant for a long time. It’s very difficult to get stuff in these days and drastically improve some of our concerns related to seed cleaning.”
He added the benefit of a new seed cleaning plant is the proximity to their operation and not having to all product down the hill and having to turn right around and haul huge loads up the hill, which is a safety concern, according to Gill.
Access to the site at this location has a “clear line of sight both east and west,” he said.
Chair of the 11-22 Co-op Seed Cleaning Plant Ltd., Garry Lentz, said the building committee would purchase the land off of Gill if council were to approve the last two readings after looking at several other potential locations.
Lentz pointed out the Highway 41A concerns that the opposed had about traffic.
“The vast majority of grain coming to the seed plant is using Highway 41A,” said Lentz.
“To put this into perspective, on an average day, we clean two truck loads a day at the existing plant. And on the busiest day of the year, we’ve cleared four and a half loads. The new plant will have two-and-a half times the capacity, so we can expand on average five trucks per day, and 10 or 12 up to peak times.”
“I consider that to be an insignificant amount of traffic for an under utilized provincial highway that was designed to carry thousands of vehicles per day.”
Jeremy Wagner was one of the nearby Ag producers in attendance who spoke strongly against the application going through.
“If you look at his yard, I don’t think he plans on moving to this yard anytime soon,” said Wagner.
“As far as noise and pollution, if you go down to the Flats and go talk to the greenhouse owners and residents that live by the seed plant, all of them want that place out of there. I am an agriculture producer, I know they need a new seed plant. I realize the other place is worn out. They need someplace else.”
His concerns revolves around the dust as other companies when the screenings come out the large amount that comes out and when the grain gets dropped off and the doors open, where there are no dust control measures.
As for traffic, oil truckers haul their product without using a jake brake and when they slow down, the speed increases slowly, according to Wagner.
“I’m a farmer and I have a heavy truck and I’ve seen other farmers that aren’t professional drivers and they don’t extend that same courtesy,” he said.
“As far as school bus traffic on that road, you’re not going to tell me when you turn off that grid road 52 or 53 on to the 41A that they’re not going to impede traffic coming either way.”
Additionally his daughter is down syndrome and has heart and lung disease and can not handle any dust.
“How is it fair that she can’t go outside and play because Mr. Gill wants to sell seven point something acres of land for a seed cleaning plant?,” he said.
County Reeve Richard Oster and Deputy Reeve Dan Hamilton, were opposed for second and third reading to go through. For Oster, he does not have a problem with the plant itself, but with the amount of trailer traffic that will going in and out of the plant as well dust and noise.
“That was never brought up, all they did was talk about how quiet the plant was and the fact that there would be no dust,” said Oster.
“But anyone that has driven a truck knows there’s a huge amount of noise and dust that goes with those trucks. That operation is talking about 10 to 15 trucks a day. That plant will be a huge imposition on 15 residences quality of life.”
Council passed the last two readings, while first reading was done at the April 3 meeting.
Gill and the seed cleaning plant committee will now go to the Municipal Planning Commission for final approval.
Ground could be broken this on a new $10 million facility near Veinerville if plans are officially approved, according to Lentz.