Foremost Theatrical Society gearing up for an entertaining performance 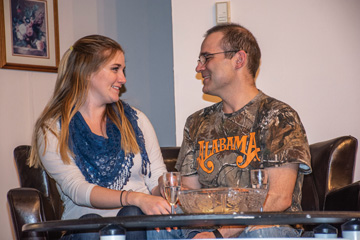 Foremost Theatrical Society will be proudly presenting three fun filled evenings of dinner theater from November 8th through 10th. Presented will be Sunday Dinner by award winning Canadian playwright Diane Grant and with permission from the Playwrights Guild. This wonderful play can be described as a deceptively light romantic comedy in which a son struggles to free himself from his single overbearing and demanding mother, while trying to find love with his new girlfriend. Sunday Dinner, produced and directed by Daphne and Gord Johnson respectively, offers a four person cast consisting of Kerri Buis who plays Violet the twice divorced interfering mother, Charlie, the attractive naive son, played by Stacey Kultgen, and both his current girlfriend, the sweet Lori -who is played by the funny and expressive Kelsey Horgus, as well as Sylvia the ex girlfriend, played by the lovely Tricia Kramer, and mother’s favourite. This not to miss crowd pleasing production offers twists and turns that will leave you laughing on the edge of your seat as Charlie navigates between his love of Lori, his desperate and manipulative mother and her shenanigans with the collusion of Sylvia.
Gord Johnson would like to thank all those who are involved in this production including Beth Dixson – Costume designs, back stage assistant Josepha Scott, lights and sound by Mitch and Lauren Walker as well as the amazing dinner coordinators Carrie Hougan and Sandy Karl. Sunday Dinner will be held at the Foremost Community Hall with cocktails starting at 5:30 p.m., dinner to follow at 6:30pm and the show at 8:00 p.m. Tickets are on sale now by calling W. Buis Holdings at 403-867-2436.
Tickets are $42.