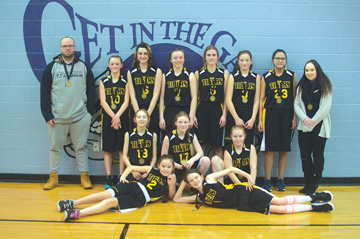 The Irvine School Tigers junior B girls basketball team capped off an undefeated regular season by beating the Hat’s Notre Dame Academy Bulldogs 58-22 in the league final on Feb. 13.
The victory finished off a 20-0 record, with the only blemish coming in tournament play where the girls lost two games.
“We really focus on our defense and working together as a team,” said coach Daniel Douglas.
“ The biggest thing going in at the beginning of the year, we saw is because we have a lot of developing players that we needed the older players to carry the team. By the end of the season here, the younger players were hitting shots and making big plays.”
Perspective and desire were discussed on the eve of the big game.
“I really focus with these girls on more than just the sport because in the end, it’s life that matters,” said Douglas.
“We really work on building positive habits as people and individuals, so that these girls can go and take that into the work force as women in the world.”
While Grade 7s and 8s saw most of the court time, it was a goal of Douglas’ to get the four Grade 6s penciled in as much as possible for development and the three Grade 9s would shift in and out as much as possible.
“We try to keep a good match of the team,” he said.
“We’re one of four teams in the league that have this composition. It was very interesting to see the dynamics of the other teams and how we fit together.”
Grade 9 player Jordie Pierson took command of the court all game long and has really built a case for her transition into making the jump to Eagle Butte High School next season.
“It’s been a really great experience and I’m excited to move onto high school,” said Pierson.
Hustle and never giving up was overwhelmingly the keys to success, she added.
Douglas believes Pierson can go far with basketball.
“Jordie’s got a lot of talent and I told her if she keeps this work ethic and this amount of desire, she could take this to college,” he said.
Bulldogs’ coach Tyler Stahl was pleased with his team’s effort despite the loss on home court.
“We knew coming into this game that Irvine is super tough,” said Stahl.
“They have some really strong players on their team. We knew we were going to have to play. We didn’t get some bounces tonight we were hoping to get. I’m super proud of the girls and how they played.”
The score was not indicative of how the girls played, especially in the first half of the game, while in the second half the girls became a little deflated because of the score, he added.
“The first half we kept up to them,” said Stahl.
“Irvine could not miss tonight. They were on fire. We just missed some key shots that we could’ve made.”