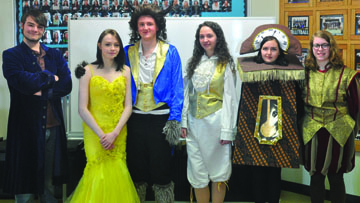 The Eagle Butte Drama Group along with Seven Persons, Irvine and Redcliff students are working hard as they get set to perform the Disney-classic of the Beauty and the Beast musical later this month at Medicine Hat College.
Jake Lavoie-Pierzchala plays the Beast and said having one of lead roles has a lot of responsibility.
He felt the part has led him to study the film more to re-create the magic of the story.
“I’ve at least seen the live action Beauty and the Beast seven or eight times,” he said.
“The animated one I’ve watched once or twice. I’ve definitely tried to encompass that live action and the movement so it’s more natural in the performance I’m doing on stage.”
He noticed in the animated film that the Beast is more clumsy and less social, but in the live action movie, he is trying to be a lot more kinder and more familiar with his environments.
“I’ve tried to really bring forth that kind of being able to integrate while with other people. Even though that he’s angry and frustrated, it’s just because of the situation and that’s not who he really was,” said Lavoie-Pierzchala.
“He’s a cocky teenager who had a situation put on him and that really just made him feel hopeless.”
A challenge has been the voice tones and the comfort of the costume props.
“A lot of the hardest parts are the yelling because it’s really hard to yell and also the itching. It’s very itchy to wear this wig and all the other hairy items of clothing,” he said.
Belle is played Jessica Balfour and she felt the co-lead role is a “little nerve-wracking,” because it has been the biggest role she has ever played.
“I have to keep in mind Belle is a character (that’s) very intelligent and she knows when someone is trying to pull the wool over her eyes,” said Balfour.
“I’ve got make myself be a lot more smarter. She’s also got a lot of sass. I’ve definitely got to bring that out a little bit. It’s fun though.”
Gaston is played by Dayne Rice in the cast and was is a character he describes as a “character of hubris.”
“He’s got an ego the size of his muscles,” said Rice.
“That’s what he lives for. He’s got to be the biggest, strongest and the best in the room. He’s got have the most ladies, the best lady. He wants the biggest prize in the room.
“It’s just a thing of tin but it’s the prettiest. Gaston is not the guy you want to be for a husband.”
He thinks Gaston’s traits are similar to his own.
“I’m a fairly laid back guy and in doing this role I get to magnify the way I act, speak and sing,” he said.
“I find it very easy to get the Gastony voice going.”
The performance’s musical director Anne Morrison said the most important part of a musical is the music and with Beauty and the Beast, the playlist has songs that can relate to many people.
“It’s got so many recognizable songs,” said Morrison.
“Kids love it. My generations loves it because they remember the animated one. This generation knows the live action one. When it was available, it was like ‘yeah it’s one we’ve got to do.’”
It’s the experience of being involved in the musical that’s important.
“It’s giving the kids the opportunity to perform and giving them a chance to shine,” she said.
There will also be a Pitt band of 20 players helping out with the production.
Beauty and the Beast will play from March 21-23 at the Medicine Hat College theatre.
Showtime is 7 p.m. and a matinee will be played at 2 p.m. on March 23.
Tickets are $20 and can be purchased at Tixx.ca.