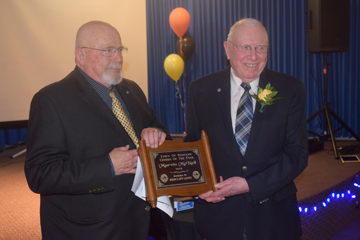 Commentator/Courier photo by Jeremy Appel Brian Lowery of the Redcliff Lions Club presents Marvin McNeil with the 2018 Citizen of the Year Award on Saturday.

By Jeremy Appel
Alberta Newspaper Group
Marvin McNeil has been named the Town of Redcliff’s Citizen of the Year for 2018.
He formally received the honours April 13 at the Volunteer Appreciation Night banquet at the Royal Canadian Legion Branch #6 in Redcliff hosted by comedian and magician Trevor Moore.
In addition to the main award, 15 community groups were recognized for their service, including Redcliff Citizens on Patrol, Senior Citizens Society, Meals on Wheels, Friends of the Redcliff Public Library and Gordon Memorial United Church.
McNeil,a former alderman whose lived in Redcliff for the past 40 years, told the Courier it’s important for people to get involved in the community and encourage other people to play an active role.
“I’ve just done it and helped out. I didn’t really expect anything like this, to be awarded the Citizen of the Year,” he said.
McNeil said he was “awestruck” when he found out last week that he would be this year’s recipient.
He’s currently part of a group that’s attempting to get a new community centre built in town, in addition to staying active as president of his condominium.
Brian Lowery of the local Lions Club presented McNeil with the award.
“It would be possible to spend quite a bit of time this evening extolling Marvin’s accomplishments,” Lowery said, touting McNeil’s role in introducing Redcliff’s extensive network of walking path and trails, as well as the curling club.
In his remarks, Mayor Dwight Kilpatrick pointed out the symbology of the event’s poster that a hot air balloon over a blue background.
“Every time you go out and help somebody, you increase their memories, their pride in the community and feeling of the worth. That lifts them up,” said Kilpatrick.
“The balloons on the posters represent the diversity of all of the volunteers, the different sizes, shapes and colours, and the blue background is, ‘Working together, the sky is the limit to what we could accomplish.'”