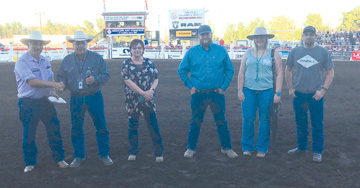 Commentator/Courier Photo by Justin Seward Arlin Cash, left, a congratulationsfrom Cypress County ag service board Shane Hok. Others in the photo, left to right, are Connie Cash,Nolan Cash, Beth Lewis and Blaine Cash. The Cash family members were on hand for the presentation of the Cypress Farm Family of the Year award at the Medicine Hat Exhibition and Stampede rodeo Friday night.

The Cash Family, which has operated its cattle company near Seven Persons for 28 years, has been honoured with the 2019 Cypress County Farm Family of the Year Award.

The annual award goes to the farm family which best demonstrates the value of the family farm to the rural communities and society in general.
Criteria also requires the family to be active in primary agriculture, have agriculture as the main source of income and have members residing on the farm.

“It’s definitely an honour,” said Arlin Cash, who oversees the operations of the Cash Cattle Company and is in partnership with his wife Connie and two sons, Blaine and Nolan.

Daughter Rachel helped on the farm growing up but is now focusing on her career in the Calgary Police Service.

“This was a complete surprise,” said Arlin. The Cashes’ next door neighbour is county councillor Dustin Vossler “and he just drove in the yard and said ‘You’ve won this.’ We had no clue. It’s nice to be recognized for doing something as a family.”

The Cash Cattle Company has a cattle feedlot and additions that include operating a custom baling service where the hay and straw is produced by the company and hauled by their own trucks and then acts as a dealer for net wrap and twine and performance seeds.

The family works 1,900 acres and some of the land was farmed by Connie’s grandfather Daniel Brost, before being passed on to her father and ultimately passed on to the Cashes.

Both Arlin and Connie head up the mixed operation of 200 head of breeding stock and around 300 calves.

“We kind of like to fly under the radar a little bit if we can,” he said.
“We just like to work and do our thing.”

Barley, wheat, canola, flax, silage and pulses are also grown on the farm.
The family enjoys being a part of a prosperous and progressive county, said Arlin. “I think our county is pushing agriculture and farming,” he said.

“That’s nice they recognize (that) we’re close to urban and we have to get along with them. We’re close to Medicine Hat and they’re trying to put a balance in between the acreage owners. It’s nice they’re putting an emphasis on agriculture.”

With the Cashes having purebred cattle, the family is trying to put more quality into the product and doing better with the same amount of care as any other animal, said Arlin.

“In the feedlot, I’ve gone through my courses, I’ve done my verified beef,” he said.

“What we’re trying to do is (being) careful what you do with the beef. You don’t ship them when they’ve had any antibiotics. You look after all those things that people are concerned about.”

Beef shipped out is “top quality beef that I want to eat myself.”

Cash is a firm believer in bringing younger people into agriculture.
“I like to see young guys in agriculture. That’s our future, not corporate farms,” said Cash.