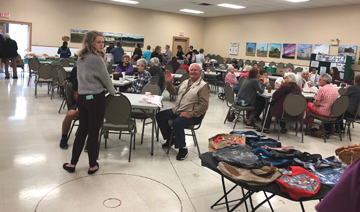 Commentator/Courier Photo by Samantha Johnson. A customer appreciation was held on the afternoon of Sept. 13 at the last Friday Market of the year in 2019. The Market returns Friday after a one-year hiatus.

The Friday Market at the Golden Age Centre has been an institution in Bow Island since the early 1980’s.
Bev Rapson finishing up her final year as organizer with the last market on Sept. 13 and contact person for the event, after being at the helm for the past seven years.
She said it was nice to see some new vendors out this year.
“There were eggs, until the chickens stopped laying, and the pie lady was new this year. There was also some young people selling baking until school started and they couldn’t come on Fridays anymore,” she said.
Asked if anything was different about the 2019 market, Rapson commented, “it made a difference with the Hutterites not showing up until 3 p.m., which meant most of the customers showed up a little later.”
“We’ve had 11 markets this year, with 18 different paying vendors. The market hosted the Bow Island Hospital Auxiliary, the Bow Island Health Foundation and the United Church at no charge. Our final market of the year is in appreciation for the support of our vendors and all the people who came out to shop and enjoy a social time,” Rapson added.
Thirteen-year-old Simon Waites has held a stall at the market for the past three years, since he was in Grade 6. He bakes the cookies he sells and tries to grow as much of the produce as possible.
“I thought it was a good opportunity to make some money and learn how to grow a business,” he said.
Earning just over a $1,000 this year, Waites says he’s had a good year. He has no plans for how he will spend the money, saying right now he only wants to save it.
Thelma Boyd sold her coloured pencil drawings, along with water and oil painting. She has also had a stall for the past three years.
“I started selling when I could no longer set up the tables, which I did for all events at the Centre for years,” said Boyd.
Boyd has been at the Market every week this year.
“I did pretty good and can’t complain,” she said of the 2019 market.
One stall that made an appearance only for the last market of the year was Weston Mastel’s decorative gourd table. Weston, who will be nine-years-old before the month of September is out, also did a single showing at the market in 2018, when fall is upon us and customers are interested in buying his product.
Mastel thinks he did better this year than last.
“I came with five bins of gourds and this is all I have left,” which was only a smattering of gourds at the bottom of his last two bins.
He grows the gourds at home and does almost all the work himself.
There was a great turnout for the final market of 2019, with those attending enjoying the free coffee and donuts as part of Customer Appreciation Day.
Rapson would like to thank all who supported the market and the vendors who had stalls this year.