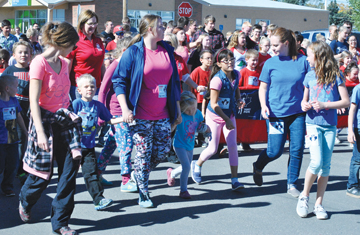 If you have in lived Bow Island long enough, you will know that the annual Terry Fox Run is one of the biggest events that the community hosts every September.

For Senator Gershaw and Bow Island Elementary Schools’ Terry Fox Run coordinator Dwayne McKay, the run every year is worth the community’s time and near and dear to his heart to start the school year.
“It’s such a great cause with Terry Fox and hopefully they’re making great strides towards curing cancer ,” said McKay.
“It’s a big part of what I believe in because I’ve had several family members that have had cancer in the past and even presently, my dad right now. I take it pretty seriously and I kind of hopefully project that to the kids. It’s ought for fun but there is a big message behind it.”
Students view a new video every year of what Fox did in support of cancer research before they go out in Bow Island for the run.
“We’re in it for community spirit but we’re also in it for a great cause,” he said.
McKay says it’s important for all the students to get together for the Terry Fox Run because as he puts it “cancer doesn’t pick and choose where students go to school. Cancer happens to everybody and it doesn’t matter if you go to a Catholic school, public school, it’s in your face.”
The schools help fundraise for the nationwide initiative by borrowing some boots from the fire department and “Fill a Boot for Terry.”
The objective is for each class to bring in their spare change and fill the boots.
“We’ve raised $250 per school per year,” said McKay.
“We do it close knit. The fire department helps us out by bringing us around and leading us.”
The initiative has brought in around $10,000 since its started.

Students will be wearing their big stickers with a name on them who they are running for on Sept. 26 starting at 11:15 a.m. The community is welcome to join.

It is usually that all four schools in the community do the run together on the same day, but St. Michael’s School and Cherry Coulee Christian have the that day off. Those schools will be doing their run in October.