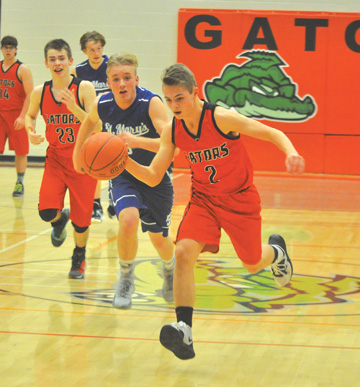 Jamie Neustaeter runs the floor against Taber's St. Mary's during a Gators home game on Dec. 16.

Senator Gershaw Gators senior boys basketball head coach Renee Grol says the goal by the end of the year is be a south representative at the provincial tournament.
And what may help the boys will be the realistic goals Grol has rolled out for the team.
“In any game we want to be the well conditioned, so we can play harder and another goal at one point in the year is to be a top 10 team in the province , said Grol.
“We hope that if we can do both of those things that it can help us reach our third goal and go to provincials.”
The roster is comprised of four Grade 12s, four Grade 11s, three Grade 10s as well as one Grade 9.
“We have a mix of everything,” he said
“ I think we can be a good strong team moving forward still yet as long as the guys know they have to come in every day and work hard and don’t take any games off, we should be alright, ” said Grol.
Grol has coached the boys for five years now and says there has been a nice mixture of players all the way through, which has not affected his coaching style at all.
The team will play around 30 games this season on route to a hopeful provincial berth.
The boys now will break for Christmas and will have a stretch of good practices, he added.
“We want to be peaking in February, March, not right now,” he said.
“We’re learning every game and trying to better ourselves.”