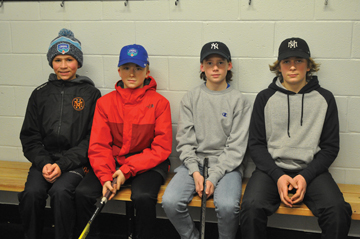 For four local pewee hockey players, the opportunity to play on the Alberta Winter Games stage together became a reality.
Redcliff’s Slade McFadzen and Cash Olson as well as Desert Blume’s Tate Bowal and Seven Persons’ Josiah Jackson, who all play for the Medicine Hat Hounds Orange pee wee ‘AA’ team, will be carving up the ice in Airdrie during the 2020 Alberta Winter Games with the Zone 2 team this weekend.
“I’m really excited for the experience,” said Bowal.
“It’ll feel really good to have them (teammates) and to know them. If you don’t feel comfortable, you can just go with them and feel safe around them.”