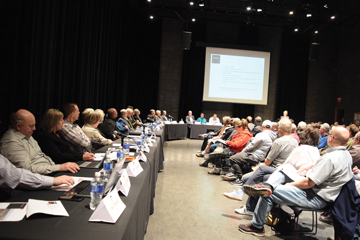 Alberta Newspaper Group Photo by Collin Gallant More than 100 residents of Cypress County. Redcliff and Medicine Hat-along with their elected local representatives- took part in a joint public hearing on the Tri-AreaI Intermuncipal Development plan on Feb. 27 at the Esplanade's studio theatre.

At the well attended meeting for the proposed Tri-Area Intermunicipal Development plan (IDP) on Feb. 27 at the Esplanade, the most contentious issues were restrictions on sub-divisions, the proposed greenhouse corridor and environmental protection.
Jeffrey Dowling, director of municipal services for Cypress County, in response to a query by Walter Eisenlohr, explained restrictions in the potential growth area, “a landowner needs to have a minimum of 40 acres to subdivide and can only subdivide 10 per cent of the title. In addition, a maximum of four subdivisions can be created from an un-subdivided quarter section.”
Eisenlohr felt it didn’t clarify.
“I live on Range Road 55 and across the street a realtor has put up a sign advertising thirty-acre lots for sale.”
Dowling responded, “because a sign has gone up doesn’t mean the proper enquiries or applications have been made to have a subdivision development of that nature.”
Michael Schlenker of EGS Farms, who has a large portion of land falling in the proposed greenhouse corridor is “not opposed to the greenhouse corridor but is opposed to the proposed location and the restrictions it places on his family to subdivide and live on their own land.”
Rick Belau, who owns land near Southridge was disappointed key stakeholders were not involved with the creation of the IDP.
He wants, “the proposed IDP to be rejected as it is currently written. There should be more attractive development available closer to the city boundary and it (the IDP) places the city in control of much of the future development and economic activity within the county.”
Pam Baedke, an adjacent landowner to an existing greenhouse property and the proposed greenhouse corridor, was also concerned about lack of consultation with the affected landowners and wonders, “what effects it will have on us and our future development? Why is the green house corridor so close to city limits and what will it do to my property value? What about light pollution?”
Dowling addressed the light pollution issue, “regulations in the Cypress County land use bylaw stipulate the need for blackout curtains to minimize a certain percentage of the illumination and some of the nuisance factor.”
James Johansen, director of planning and engineering with the Town of Redcliff, clarified, “the IDP is not creating a greenhouse zone. There would still be a requirement to request a rezoning for greenhouse operations. The IDP only identifies an area where greenhouses have developed and where they could potentially continue to develop.”
Joanne Cooke of Redcliff asked why the greenhouse corridor wasn’t put into the proposed commercial and industrial area, where the large cannabis greenhouses already exist.
Kent Synder, general manager of Planning and development services with the City of Medicine Hat, explained, “the proposed greenhouse corridor doesn’t prevent greenhouses from being developed elsewhere in the IDP area.”
Holly Turnbull, a landowner who lives on Holsom Road, has concerns about future expansion of the airport, how the greenhouse corridor falls within the airport protection overlay, light pollution from existing and future greenhouses, combined waste management in the proposed greenhouse corridor and conservation of unique habitats and species.
Turnbull said, “I would encourage the IDP team to consider conducting an environmental impact assessment for our forward motion plan rather than leaving it to individual developers. The unique habitats in the area and number of species at risk bring eco-tourism into the area and should be protected.”
Martha Munz-Gue echoed environmental concerns, “I would like to see generous setbacks from all the waterways that go beyond the provincial regulations. In addition, setbacks from the tops and bottoms of the coulees, which are important wildlife corridors along with natural complex plants of prairie ecosystems, are also needed.”
Dowling recognized, “there are environmentally significant areas throughout the entire IDP area, and we intend to ensure environmental needs and requirements are being met at both provincial and federal levels.”
In overview of the evening, Dowling felt, “some of the questions were anticipated and I don’t think anything from the presenters came as a surprise. From tonight we now understand what the concerns and issues are. We aren’t going to please absolutely everybody and the IDP can’t be everything to everyone. There is potential based on the input and feedback the three councils received tonight that amendments or changes could be made to the document.”