Redcliff’s new CAO wants to grow with the community 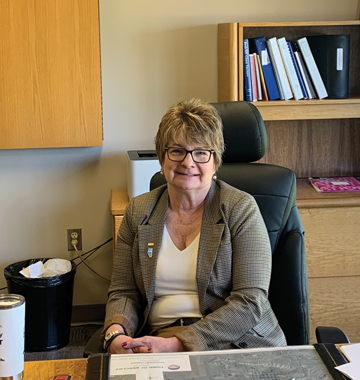 Phyllis Forsyth started her tenure as the Town of Redcliff’s new chief administrative officer (CAO) last week, and saw the municipality as a good fit because she now only has one council to look after.
“The draw for me to come here would be that I have one council to look after,” said Forsyth.
“When I was with the Summer Villages (Sylvan Lake area), there were five. One council was a draw, a bigger municipality (with) new challenges. But with that bigger municipality comes with the expertise of the some of the staff.”
She was the CAO with the Summer Villages for eight years and says it was time for a new challenges and changes and new blood for all organizations.
“I think with my strengths I can add to the team that’s already here. They have some great skills and I think we can bring it together into a really dynamic team, she said.
“ I think where I am going to enhance the team here more is with structure and support.”
Forsyth has worked in municipal government for 25 years on both the urban and rural sides in Alberta ,and had progressed through the ranks the 12 years prior to her first CAO job.
“I started grassroots really,” she said
“When I finished high school, I went to business college. So I came out back then as a secretary and I’ve worked for the provincial government in the court system and with Alberta Parks and Albert Forestry Service. Then I went to work for the Town of Rocky Mountain House and from there I went to Clearwater County.”
She was hired by Clearwater County to do an emergency response plan and that position worked for her because that is where her professional and personal lives came together.
“They found out I had a hobby in computers, so I became their special projects (person),” she said.
“The CAO at the time, Brian Irmen , really encouraged education and growth and with the secretarial background and some of my other skills, he wanted me as his executive assistant. He said ‘you need to grow, you have so much potential that I wanted to do this.”
She was encouraged by Irmen to do the local government certificate program and then she took her NACLAA 2 (National Advanced Certificate in Local Authority Administration).
Once she completed those courses, she had more responsibilities at Clearwater County in effort to help her grow.
“Between him, my husband and the support team, when the Summer Village opportunity came along, I was fully encouraged and supported,” said Forsyth.
“I’ve had great mentors throughout my career and I’m still growing and learning.”
She is continuing the learning and growing process into her new municipality.
“That’s my goal for the first couple of months is to transition into Redcliff,” she said.
“I don’t think it’s appropriate to come into a municipality with ideas of big changes. If you don’t know it’s broken, you shouldn’t being trying to fix it.”
Her focus will be to further enhance her knowledge of the Intermunicipal Development Plans and the Intermunicipal Collaboration Frameworks, which were both, signed off by April 1 with the City of Medicine Hat and Cypress County.
As a new CAO, she will also be building relationships with both of those neighbouring municipalities.
She said Redcliff “ is a beautiful community, the residents are incredible and I just want to keep that.”
She would like to tackle learning about the history of the town.