CyclePath has not experienced an ‘off season’ in the last year 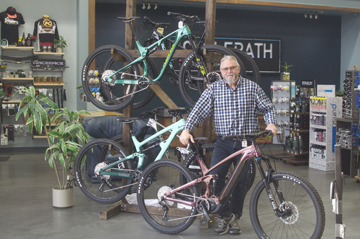 Commentator/Courier photo by Justin Seward CyclePath owner Greg Watson has seen a high demand for bicycles amid the COVID-19 pandemic.

Medicine Hat’s CyclePath owner Greg Watson says his bicycle shop was not prepared for not having an off season amid the COVID-19 pandemic.
“Generally, January and February is a time to build bikes and get ready for the season,” said Watson.
“And people, because they are aware of the shortages of sporting goods, they didn’t stop purchasing bikes. The season was moved forward quite a bit. We’re already seeing a fairly significant shortage of bikes.”
CyclePath is expected to see a solid supply of bicycles this summer.
“But it’s going to basically be come in, build, out the door,” said Watson.
“A lot of them are already pre-sold. People are waiting, so we’re not going to have a large selection of inventory, but we will be able to accommodate more people as the summer goes on.”
Bicycle supply is sparse and there is not really a certain estimated time of arrival for the new bikes at this current time.
“They just show up, but we’re getting in small quantities,” said Watson.
“Instead of getting 50 to 100 bikes in a delivery, we’ll get five to 20.”
Watson said as far as inventory wise, there is no preparation.
“The supply chain is so fragmented and slow right now that it’s just difficult to get product,” he said.
Watson is seeing people who haven’t cycled in years and re-embracing biking and finding out the technology and comfort of the bikes as far back as 20 years ago is completely different.
“We’re getting a lot of people that are just re-evaluating their lifestyles and getting out there and enjoying it,” said Watson.
“A huge one for us right now is the electric assist bikes. The older demographic is absolutely loving Medicine Hat and discovering it because the hills and wind don’t matter anymore.”
Watson wants to remind riders that bikes are still coming in and if you want a bike, you will have to be patient.
CyclePath pre-order their bikes usually in September for spring and are often delivered in the winter.
“We haven’t seen 85 per cent of them yet and we’re already into April,” said Watson.
“We won’t see a majority of those until even June. We’ve already pre-ordered our 2022 and some of our 2023 bikes in anticipation of delays.”