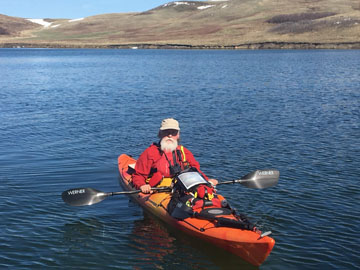 he Medicine Hat Paddling Club is celebrating its 35th year and continues to preach safety on the local waterways with their increased use.

“And I don’t think folks really understand how much good water is in the Medicine Hat area.”

There are many paddling opportunities including on the South Saskatchewan River, Echodale to Strathcona Park, Strathcona to 11th Avenue and Paramatta all the way through town, Seven Persons Creek and Ross Creek.

“Not only is Seven Persons Creek very utilized by public,  on any given Saturday-Sunday afternoon you’ll have 20-30 people out there paddling on creek from the Southridge pumphouse down to Kin Coulee Park,” said Redmond.

There were over 100 people from outside of Medicine Hat that came and paddled down Seven Persons Creek last year, added Redmond.

“We’re seeing a lot of folks from Calgary come down to Medicine Hat to paddle along the South Saskatchewan River,” he said.

“There’s actually three groups going through here in the next couple of weeks paddling from the  Forks to Sandy Point. It has become a real paddling destination.”

“I mean anybody paddling on any of the waters around this area and any law says you have to have a life jacket—we expect everybody to wear a life jacket when they’re paddling with us. You must have a whistle, a throw rope (and) a bailing device in your boat. I guess a lot of folks don’t realize is if you’re paddling after dark, you must have a 360-degree white light on your boat— a lot of folks overlook that.”

No alcohol is allowed on the boat as it the safe thing to do and it’s also the law.

“Unfortunately, we see a lot of liquor on the river through town here,” he said.

Rafters are considered a vessel under the Transportation and Safety Act and must have life jackets, bailing devices and whistles on board.

Redmond said the Paddling Club sees a lot of rafters through town not doing that.

“Folks, please use some common sense out there,” he said.

“If you have an accident or an unfortunate health incident, if you don’t have your life jacket on , not only you can’t be saved but folks can’t save you if they can’t find you.”

The pandemic has not allowed for the Paddling Club to host their annual safety seminars, in-pool safety sessions in the winter time.

Plans are in the works with City of Medicine Hat for the Life Jackets for Life event and Redmond will know if that event is a go this week.

The Paddling Clubs does  have discussions with school groups, seniors’ groups and do water safety presentations for various service clubs.

COVID has forced the cancellation of the Club’s Paddling Film Festival Medicine Hat for the last two years— which is a world tour of the event.

Those funds go back into promoting water safety in the community.

A partnership with Rapid Media has allowed the opportunity to join the Film Festival virtually this year, with 15 per cent of the ticket sales going back into the Club.

The Paddling Club meets on the fourth Tuesday of each month through Zoom.

People can sign up for meetings by emailing medicinehatpaddlingclub@gmail.com.

Redmond hopes by June that the Club will resume their Tuesday night paddles if restrictionsare relaxed and the return of the Full Moon paddle.

Talks have commenced with Tourism Alberta  to host the Great Big Paddle on July 8, subjected to Alberta Health regulations.

The annual Hat, Hat Regatta is scheduled for the last Saturday in September.

More information can be found at http://www.facebook.com/medicinehatpaddlingclub or through Tourism Medicine Hat’s club’s page.