Annual elk hunt off to a good start 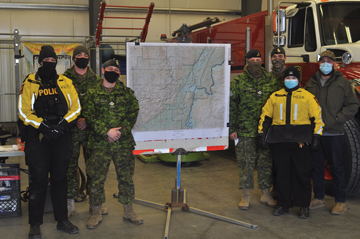 The annual elk management hunt is well underway at CFB Suffield and is off to a great start.

The hunt is meant to lessen the damage for agriculture producers and to preserve the long-term sustainability of the grassland at the base.

“When soldiers come in and we get new Fish and Wildlife — it’s (like the) cookie cutter. We’ve got a pattern; we keep going and we tweak the little things and the hunts are more receptive. Some of them may be a little nervous because they’re coming on to an army base, but when they see that we’re just a bunch of guys and we’re here to support them, it’s gone really well. I’ve haven’t seen any issues. It’s a good hunt so far and as the rest of the hunt goes, it’s just going to get better.”

For current base commander, Col. Stephen Burke, this is his first hunt at the base, and when he was in talks with an Alberta Environment and Parks counterpart, the consensus was, “There’s a very tightly run, finely oiled machine for the hunt — it all works very well.”

“The team works really well and has a really slick intake process,” Burke said. “So, because the range is a controlled area — and it’s not because we have massive numbers of secrets — it’s just, to be honest, kind of dangerous at times — mostly from unexploded ordnance still (being) a perennial threat.”

The hunting zone has off-limit areas such as the Defence Research and Development Canada and the oil access area in the northwest of the base.

“It’s  all about managing where they can go, so they can have a nice safe and successful hunt,” said Burke.

What CFB Suffield did this year is set balusters up by the gym where hunters will stop and get their safety brief over a radio system, drive back up to range control where the military police and Fish and Wildlife will do an inspection to determine if the hunters are compliant to go on the base.

“It’s about 140 hunters we’ve brought on to the block,” said Mann. “That’s a manageable number for how many patrollers we have out there.”

The herd number depends on the type of elk and the weather, added Mann.

“We could have some really good numbers and then some days we can have really low numbers,” said Mann.

Mann said some hunters are happy this is a privilege they can come and do and they’re happy with what they get to take off the range.

“It’s a big team at work, there’s not just the army doing stuff,” said Mann. “There’s a whole lot of agencies that are coming together to work as one big team to make this possible.

“Elk know the area better than anyone of us that have been out there. They can travel a lot faster because we have to stick to the roads.”

The challenge the base faces is there’s always more people that want to come on to the range than capacity allows.

“So as far as challenges go, it really goes back to it’s just about making sure that we put the proper amount of resources to the hunt to make sure that we maximize the number of people who are able to attend,” said Burke.

Joel Nicholson, a Medicine Hat senior wildlife biologist for Alberta Parks and Environment, has been with the elk hunt since its inception in 2012.

“We have an estimate going into this hunting season of 3,500 to 4,000 head,” said Nicholson. “So, that’s up a little bit of where it has been in the past, but also much lower than it has been at its highest point — which was a number of years back.”

Nicholson said AEP has plans this winter to do an aerial survey after the hunts are done to update numbers.

“It’s gone up and down as we’ve implemented management for the herd,” he said.

AEP works with the base to do the hunter check-in, collect harvest data and take samples for the chronic wasting disease testing program, assist with enforcement issues and provide information during morning briefings.

“Good,” said Nicholson, on this year’s hunt. “The first two weeks had pretty significant harvest and this week has been a little bit slower. But overall, it’s been going quite well.”

Around 350 head had been harvested since the start of the hunt, as of Nov. 22.

“There’s definitely opportunity out there for people,” he said.

The elk hunt goes from October to January for three days a week.