Santa Claus ready to parade a street near you 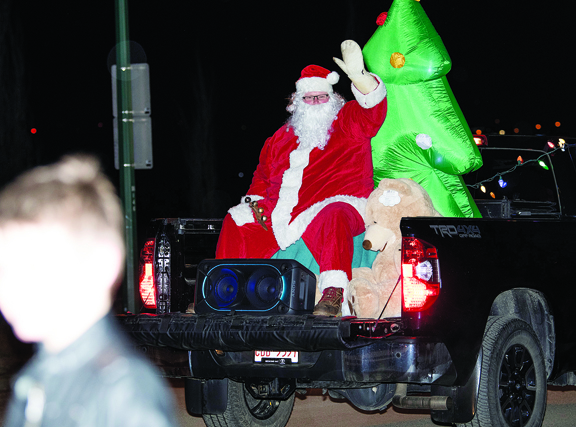 NEWS PHOTO RYAN MCCRACKEN Santa Claus waves to children on the street Thursday evening in Redcliff during the first night of the Santa Claus Is Coming To Town parade series, which runs through Tuesday in neighbourhoods across Medicine Hat.

For the second year, IG Wealth Management has partnered with the Medicine Hat News Santa Claus Fund to bring St. Nick to the people of Medicine Hat and areas on the back of a pickup truck.

“We work with the Santa Claus Fund every year, we usually do a tree auction, but we couldn’t do it because of COVID,” said Nathan Nunweiler of IG Wealth Management and co-ordinator of the event. “Because of COVID there was more people needing help and we didn’t have the means to raise the funds and the donations that we needed to help this increased number of people. This provided a solution to do so.”

Nunweiler said the other reason they decided to organize the parade was because there was no Santa in any mall locations.

“So we decided to bring Santa to everybody else,” said Nunweiler.

A five-evening event, the parade is scheduled for Dec. 13-17, from 6-8 p.m. each night. The city and region is split into five zones: Dec. 13 will be Redcliff and Crescent Heights, Dec. 14 is Cottonwood and The Hill, Dec. 15 is Desert Blume and South Ridge, Dec. 16 is Dunmore and Ross Glen and on the final night, Dec. 17, Crestwood, Connaught and the Flats will see the parade.

“The final lap on the 17th we do a grand march that goes from the corner of Kingsway and South Railway all the way up to the Santa Claus Fund Holiday Home on Dunmore,” said Nunweiler.

A new event will be added to the parade this year as well.

“On the final night after the final lap, up at the Holiday Home, there will be a parking lot party. We’ll be there with hot chocolate and cookies and Mahoney will be playing.”

Maps will be printed in the paper and shared online through the Santa Claus Fund page. During the parade, Hatter’s are encouraged to have gift or cash donations ready to give to any of the cars in the parade.

“Either we run out to them from our vehicles and grab the donation,” said Nunweiler. “Or sometimes people just run out to us.”

“It’s our second annual Santa Claus Is Coming To Town Parade, sponsored by IG Wealth Management,” said Doerksen. “We’re travelling throughout the city, bringing Christmas cheer to Medicine Hat. It was an instrumental fundraiser for our organization last year; with COVID protocols there were very few fundraising events that could happen for us so it was a great way to be able to collect cash and toy donations for our organization to allow us to serve our families.

“We’re just so thankful for this initiative in helping us bring the spirit of Christmas to our community. To date, the Santa Claus Fund has provided Christmas to 542 local families with 1,068 children.”