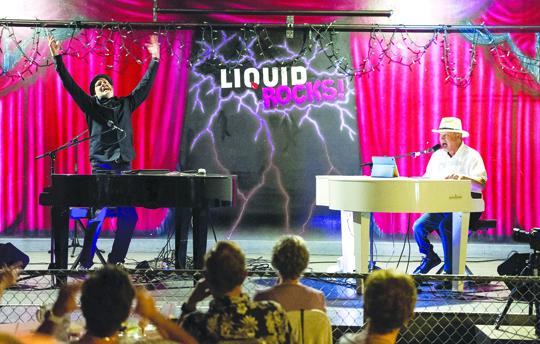 On March 19, 2022, the Multiplex in Bow Island will be the venue for 176 Dueling Pianos, an all-request show. The band is so named because each piano has 88 keys and together it makes 176. Craig Learmont and Barry Lough, both originally from Medicine Hat and now living in Calgary, will be entertaining the crowd with music, comedy, and a laser light show. The duo have played together for about a year.

“The past two years have been very interesting. Last year we did about 10 shows, so it wasn’t like we weren’t doing anything. Things seem to be picking up now. We have seven shows booked this month, so that‘s really good,” said Learmont.

Both are professional musicians with over 30 years of experience each.

“I’ve done over 1,400 piano shows myself,” said Learmont. He started taking piano lessons at seven years old and has studied classically, deciding to become a full-time musician when he was 20.

“I’ve played to stadium crowds and am an award-winning entertainer.”

Learmont won the Entertainer of the Year Award with another act.

“One of the highlights of my career was performing in front of 25,000 fans at McMahon Stadium and having them all sing back to me ‘Friends in Low Places’,” added Learmont.

Lough played keyboards and sang for the popular Calgary rock band Back In The Day which has a large repertoire of classic rock music. He has a popular YouTube channel called Just Me on Piano that features hundreds of cover songs.