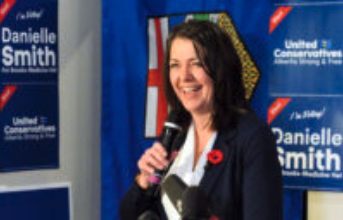 Premier Danielle Smith won her byelection race on Nov. 8 and kicked off her party’s unofficial re-election campaign in Medicine Hat, promising “substantial” health reforms, introducing affordability programs and standing up to Ottawa from her seat in the legislature.

Smith collected 54.5 per cent of the vote in the contest that featured a tighter than usual race between second and third place finishers, Gwendoline Dirk of the New Democrats (26.7 per cent) and Alberta Party Leader Barry Morishita (16.5 per cent with all polls reporting at 10 p.m.).

“This is more than a victory party, this is the start of something much bigger,” Smith told about 100 campaign volunteers and supporters at a downtown restaurant. “Despite the results today we certainly have a fight ahead of us. And now is the time to take decisive action to help Alberta families that are struggling.”

Smith thanked her opponents, but named NDP leader Rachel Notley directly, again linking her to the federal Liberal government and federal wing of the New Democrats.

“I’m really humbled and will work to represent all the voters of Brooks-Medicine Hat,” she said. “Next year, it will be the turn of Albertans to make their choice … and you can choose a united and energized UCP, that will keep Alberta strong and free and deliver more and better jobs, accessible health care and a lower cost of living.”

Smith was introduced by former Brooks-Medicine Hat MLA Michaela Frey, who resigned in early October to entice the recently elected party leader to seek a seat in the legislature. Smith will be sworn in at the opening of the next session on Nov. 29.

The media was not afforded time to ask questions on Tuesday.

During the 28-day byelection campaign, hampered in part by responsibilities in Edmonton, Smith spoke often at public events about her ability to act on local issues and juggle the responsibilities as local MLA and premier.

During several forums, Smith spoke at length about the srong impression of the Root Cellar, formerly known as the Medicine Hat and District Food Bank, the potential twinning of Highway 3, south of Medicine Hat, and the mental health initiative Our Collective Journey.

She signalled interest in irrigation expansion, and made only passing public mention of the drive by the cities of Brooks and Medicine Hat to create a hydrogen hub to attract industrial development, but met privately with members of both councils to discuss priorities.

In her speech Tuesday she said the next several months would see substantial action on affordability, a revisiting of suspending the vehicle fuel tax and options to “bring electricity costs down.”

“The provincial government has not caused one bit of inflation, but we can help deal with the effects,” she said, adding “and we must commit to genuine health reform.

In the early days of her administration, the opposition NDP essentially released daily press statements painting Smith as a destabilizing force.

After choosing and swearing in her cabinet in early October, Smith stated her plan to remove the current board of Alberta Health Services, citing their inability to increase ICU capacity four-fold during the early pandemic as a failure.

She promised to recruit more doctors and nurses to help ease staffing shortages and capacity issues at hospitals and emergency rooms by rehiring the two per cent of staff who refused a policy that health workers be vaccinated.

“My take is that if you can support 80 per cent of the platform, it looks good,” he told the News.

More traditional conservatives too said they thought Smith would rejuvenate the party and prevent a projected strong showing by the NDP in the May 2023 election.

“I think she’s smart and up to the job,” said former Cypress-Medicine Hat MLA Lorne Taylor during a rally in the Hat on Oct. 30.

Frey received 60.6 per cent of the vote in the 2019 general election, the first under the current boundaries.

Turnout in that race reached 66 per cent, following the province, though turnout is traditionally much lower in byelections.

In unofficial results, it appeared turnout Nov. 8 was about 37 per cent.