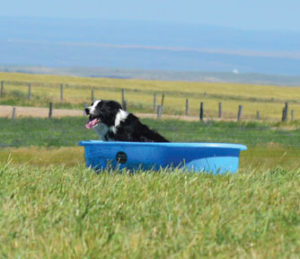 Photo by Tim Kalinowski. Nick the Sheepdog enjoys a well deserved cold soak after successfully completing his round at the Cypress Hills Sheepdog Trial on July 24. 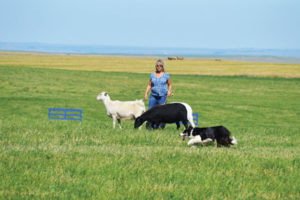 The Cypress Hills Sheepdog Trial took place this past weekend on the Jobe Farm about 12 miles south of Dunmore. Nearly 70 competitors and their dogs took part in the open event to showcase their talents at moving and herding sheep though a challenging obstacle course. The dogs did most of the legwork while the strategy and commands came from their handlers.

Chris Jobe of Canine Solutions organizes the annual event, (now in its fifth year), and provides her own land for use in the trials. She and her dog Gwen also competed during the event.

Jobe said on Sunday that it had been a great two days of competition and camaraderie between the handlers who took part.

“The weather has been good for us,” she said. “The sheep have been really good. The handlers are all pitching in to help in a lot of areas, because it is quite a big event to put on by yourself. It’s nice and green, and not too hot… It’s very much fun, and it’s fun to have good competitors to compete against.”

Milton Scott and his dog Josey came down to compete at the Cypress Hills Sheepdog Trial from Airdrie.

“It’s a really nice field here,” he said, explaining his reasons for making the trip down to Cypress County. “It’s a nice setting, and it’s well organized.”