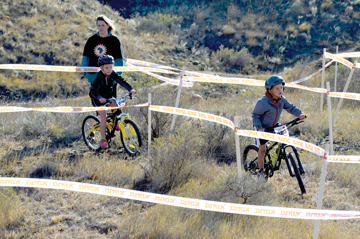 Photo by Tim Kalinowski- Linden Stigter and Scotia Wallace race in the kids' course of the Test for Humanity race in Redcliff's River Valley Park on Saturday.

By Tim Kalinowski
Redcliff’s coulee hills were home to some sensational mountain biking action this past weekend. The first annual Test for Humanity race took place on Saturday with about 50 riders from all age groups taking part.
The kids’ races took place in the morning as scheduled, but the afternoon four hour long adult test race was delayed about an hour as part of the course had to be reflagged due to soggy conditions. The race then resumed as a two hour test.
The test race involved bikers making laps of a tough up and down mountain bike course in about 15 minute loops. The most loops in the two hour time allotted would determine the winners on the day. The race was as much a test of endurance as it was of strength and skill on the bikes.
The coulee hills and autumn colours of the river valley provided a dramatic backdrop to a stellar event. There were also several biking and biking supply companies showcasing their wares at the festival associated with the race. There was free corn on the cob and “energy bacon” supplied by local food companies Eldorado Vegetable Farm and Premium Sausage. There was a bouncy castle for the kids.
CyclePath owner and Test for Humanity race organizer Greg Watson was extremely pleased with how the event came off for this inaugural race despite some of the weather challenges to the trails.
“The Town of Redcliff has gone beyond what we ever expected,” said Watson. “They are so excited about it, and a lot of our local businesses have also come onboard. They are very excited. This is just going to get bigger and bigger every year. We’re very happy with those numbers for the first year. We had no idea what we were going to get. We’re thrilled with the support we have had in the riding community.”
Watson said many were owed thanks for bringing the race to Redcliff.
“We have been organizing this for about a year and a half. The mountain biking community, the suppliers, ourselves, the 670 Mountain Bike Collective, are really excited about this event. This race also showcases our amazing coulee system we have here in Redcliff. Redcliff is very proud of this. The 670 Collective has done a tremendous job building this beautiful trail network. We are honoured to be allowed to showcase it to the world.”
And, of course, all the money raised at the event went to support a worthy cause.
“The money we raised goes toward the Canadian Humanitarian Organization,” explained Watson. “It raises funds to go to Ethiopia to buy school supplies to help children further their education.” 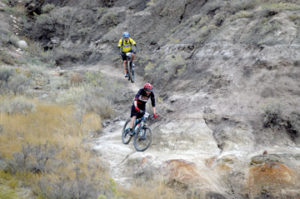 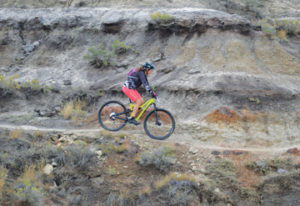 Photo by Tim Kalinowski- Katie Court makes her way over a ridge during the Test for Humanity Race. She would finish 10 laps in two hours. 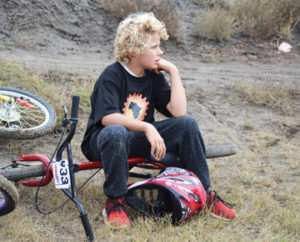 Photo by Tim Kalinowski- Ryder Parker sits and thinks about his race after finishing a close second to winner, Carter Banks. Ryder took a tumble and lost time to Banks, but got up again and put on a great burst of speed in his final few laps, 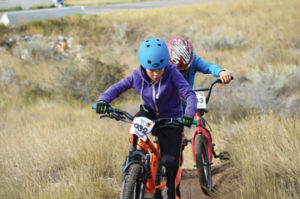 Photo by Tim Kalinowski- Carter Banks and Ryder Parker had a close race in their 30-minute test on Saturday.