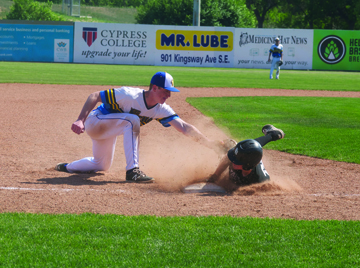 The host Eagle Butte Talons were only down 6-5 to the Brooks Buffalos halfway through the opening game at the Southern Alberta High School Baseball League’s Tier 1 playoffs in Medicine Hat on May 25.
But the Buffalos bats woke up in the later innings at Athletic Park to move on in the tournament with a 14-5 win, ending the Talons season in the one and done format.
“We had a great start today,” said Talons coach Chad Martin.
“This was by far one of our best games we played all year. We took care of the baseball for the most part. Beau Blackmen did a great job for us on the hill.
“They hit the ball well. They started hitting the ball in the later innings and that’s what happens. We’d rather see them hit the ball then have us kick it around and walk guys.”
He said it was unfortunate to bow out of the tournament early because “you want to always get to the semis and see what happens there.”
It was a learning experience type of season for the Talons as a majority of the roster was Grade 10s, while only having three Grade 12s and it was a step up in quality for baseball.
“There’s some pretty good players at the 15, 16 and 17 year old age group,” said Martin.
“I think it was a learning experience for a lot of the guys starting to realize what the older guys can do and how the older guys can play. We’ll learn from it and be better.”
Graduating player Eric Lust said the team had a good start to the contest and was pleased with the guys not giving up a lot of errors.
“We didn’t really beat ourselves this game which was good,” said Lust.
“We made them earn everything they got.”