It’s dry but still hoping for rain in Southern Alberta 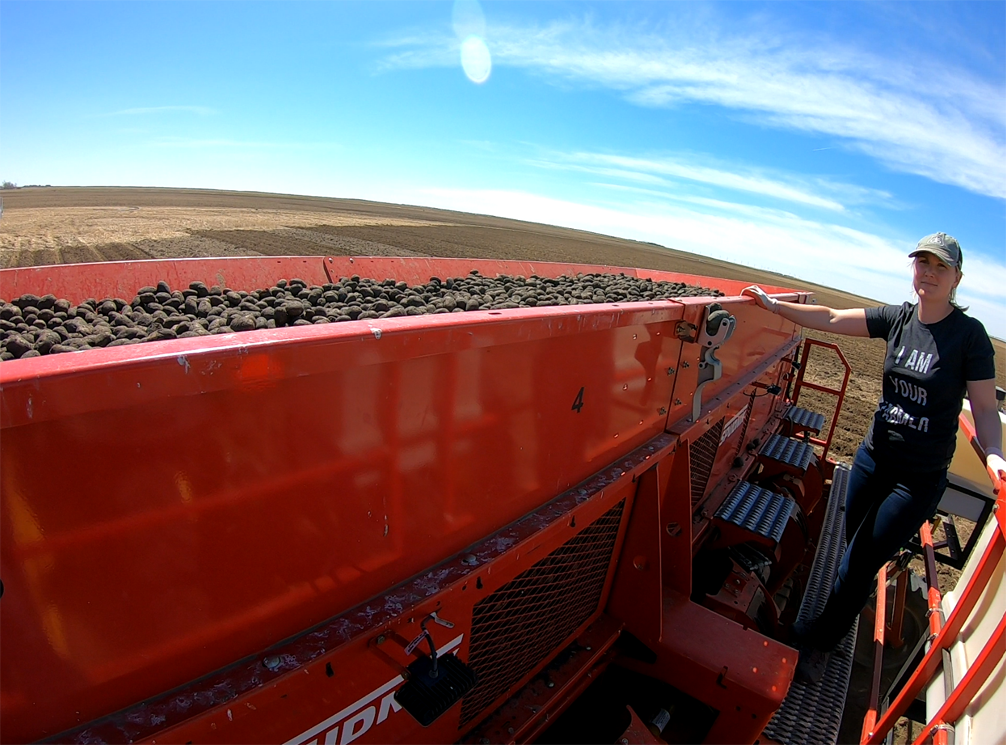 Photo submitted by Michiel Buijsse from 845 Spud Farms Ltd. Planting in 2022 has been rolling along.

Conditions across Southern Alberta are dry, causing concerns for farmers. In the May 1st issue of The Potato Minute, the newsletter for the Potato Growers of Alberta (PGA), Executive Director Terence Hochstein writes:

Here in the south, we are the total opposite from the rest of the province. For the most part, we have received very little snow this winter and the fall was open and dry. Whatever little soil moisture that may have been present, has been removed by the horrendous winds that plagued the south this winter and spring. There’s been more than one day that the province of Saskatchewan was on the receiving end of Alberta topsoil. In some of the dryland areas, here in Southern Alberta, the ground that has been no-till planted for many years, shows evidence of soil erosion for the first time since the 30’s.

Will Muller, Provincial Director for Alberta Pulse Growers, said “lots of crops in the Palliser triangle seem to have no option but to plant into the dry dust and crossing our fingers for rain.”

Kelly Van Ham, Board Director for the Alberta Sugar Beet Growers for Burdett/Bow Island as well as Chair of the Canadian Sugar Beet Producers, said, “we have about 4-6 inches of moisture in the soil. I’d say it is enough to germinate the crop, I hope, but after that we are going to need some adequate and timely rain to try to bring those crops to harvest.”

Terence Hochstein of PGA was more succinct, “zero rain, zero is zero. Very dry and very concerned about the lack of moisture.”

Muller, who farms with his brother and father on their company farm Muller Ventures Inc. outside Bow Island, which is a mix of irrigation and dry land, said, “One thing you will see this year is that many farmers are maybe seeding a bit deeper than average on dry land crops to try and get to some of that moisture if there is any at all. I think many farmers are expecting this year to be dry seeing how our spring and winter have had such little moisture. We definitely need a rain soon to help those seeds in the dust sprout out and help make a more uniform crop for this summer.”

It’s not only the dry conditions, wind and frost are also causing concern.

“This spring has been particularity cooler than most springs, many of the farmers have waited to seed due to that while many, including my farm, took the risk knowing things will warm up,” said Muller.

The strong winds that have been experienced in the area, along with the drought conditions, has led to what looks like a sandstorm some days. For those crops that are seeded shallow, this can lead to the seeds being blown out. “We have put a cover crop on some of the acres that we are concerned about to help elevate the risk of the seed blowing out. Frost still seems to be one of the biggest concerns in the back of my mind when planting this year, just due to the cold start,” said Muller.

“I think it should be adequate,” commented Van Ham, who farms 4500 acres south of Bow Island with his wife and two sons.

“We are using up more this spring just to get the crop up out of the ground than I would like. Using that water to germinate those crops, which we’ve already been doing, takes away from later in the season where we need that water to help to develop and bring the crop to fruition.”

Van Ham points out that “there is flexibility as there is 16 inches on every acre so if I don’t use it on some crops, like the cereals, I can take it over to the crops that do require more water, like sugar beets.”

The extreme heat wave for most of the summer last year is still causing issues going into this year. Overall yields of potatoes were down 10-15% below average.

Hochstein said, “2021 was a disaster, one of the poorest crops in years. The extreme heat last summer did many things we weren’t aware of to the storage crop. Whatever was harvested last fall, processors spent all winter trying to stay ahead of it because there were storage issues. Normally we can store potatoes year-round in the grower’s storage. They would be harvested in October, and we would still be delivering those potatoes to the packers in July and August the following year but there was lots of problems.”

Muller said, “the extreme heat for most of the summer (2021) has caused issues moving forward into this year. Shipping seems to be more of a concern with beans and the container crush that seems to continue, and the cost of moving crops.”

It’s not only that, but also the drastic increase in input costs and the ongoing uncertainty in global markets.

However, as Muller points out, “I would say the general mood among pulse growers is… like all farmers, optimistic. I don’t think you can be a farmer and not be an optimistic deep down, because there is all sorts of risks we take on every year, this year is no different.”