Former refugee has some tips for new arrivals 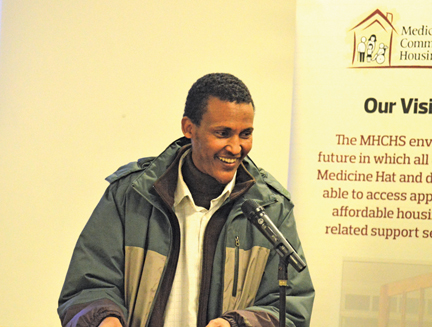 Abdi Ibrahim and his family came to Medicine Hat from war-torn Somalia in 2007, hoping for a peaceful and prosperous new life.

By Tim Kalinowski
During the National Housing Day event put on by the Medicine Hat Community Housing Society last Friday at the Southside Event Centre a lot of focus was put on Habitat for Humanity’s efforts in the region to try and give affordable homes to families in need. One recent recipient bravely stepped forward to tell his story and give an honest account of his experiences as a newly arrived refugee immigrant to Medicine Hat in 2007.
Abdulrahman Ibrahim, also known as Abdi, spoke about having to endure racism in the city, and other challenges, as he, his wife and their seven kids tried to make a life for themselves in their new country after fleeing the Somalian civil war.
“When we arrived in Canada we were living in poverty and didn’t know the language,” said Ibrahim. “Language was our biggest barrier toward community inclusion, and we had only limited access to translation service through Saamis Immigration which made very simple tasks like filling out the forms seem almost impossible.”
While languishing in social housing for the past seven years, Ibrahim said his family had to endure racism in Medicine Hat due to their nationality and their religion.
“We found that average Canadians do not have a good attitude toward new Canadians. Our family was put in high stress when we experienced racism. We tried to protect our children against that racism, but they know they have to look out for themselves and each other. We are Muslim and we teach our kids to pray for peace and love of ourselves and others,” he said.
It took several years for Ibrahim to land a decent job. He then applied for assistance from Habitat for Humanity to give his family a good home. After three years of waiting, he got his friends together with Habitat of Humanity’s volunteers to build the home of his family’s dreams starting in May of this year. They were finally able to move in a month ago. Ibrahim has some advice for the new Syrian refugees who are expected to arrive in the Medicine Hat soon.
“At first you have to patience. People in Medicine Hat are generally not welcoming… It took three to four years to feel comfortable in Medicine Hat, and feel like we could trust people and people made us feel we belonged.”
Ibrahim hoped the new arrivals would have a better experience than he and his family did when they take their first few steps into a safer and better life here.
“The city is peaceful and quiet, and you get the good people, (that’s) most of them. But you see the negative people too. I hope the community will be more welcoming to these (new refugees).”