A peek at the new president of the Golden Age Centre 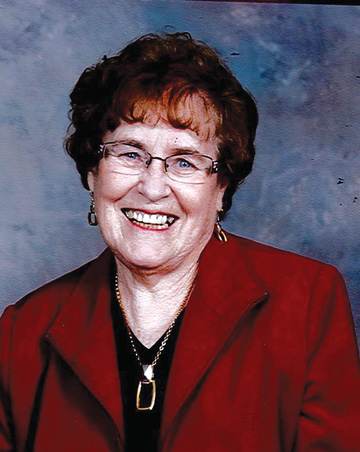 Photo Submitted Golden Age Centre presiden Ella Nelson is looking forward to getting to know what the centre has to offer.

Taking over from the past president – Fritz Braat, who held the position for five years – Ella Nelson has been under a steep learning curve since taking on the job in February.
“I needed to learn how they did things at the centre, (and)what the activities were, the rules and regulations, and the history of how it started,” said Nelson.
She continued on, “I’ve had similar roles, I was a director of the Golden Age Centre in previous years, and the president of the Legion’s Auxiliary, which is no longer around. I’ve always kept busy.”
Asked why she wanted to take on the role, she replied, “I was asked to allow my name to be entered for nomination. It’s been less than a year since I had a major surgery and while I am getting better, I think it might have been too soon when I took on the role in February.”
The term for each member of the executive – president, vice-president, secretary and treasurer – is two years. There are also four to six directors who have three-year terms and act as advisors. In addition, there are many helpers among the membership who take the lead on certain things.
“We have an excellent entertainment committee, who already have a number of events in place for the upcoming year which are aimed at the younger seniors,” explained Nelson.
“They’ve already put on a Great Canadian Barn Dance, which was held in Burdett this year as they have better wheelchair access. Unlike regular activities at the centre, the committee sold tickets to the general public for the Barn Dance and it was a great success. The sock hops and Christmas party are also events where tickets are sold, and the public is welcome to attend.”
Nelson added, “For all regular activities, you need to be a member to take part, although guests are allowed to join. Regular activities include playing cards four days a week throughout the summer, and bingo will start again in September on Wednesday afternoons.”
The centre is trying to attract more interest in the pool tables. Nelson’s husband used to organize the players but since he passed away a couple of years ago, interest has flagged.
“It seems to be picking up now, with more members showing up and using the pool tables.”
Membership is down a little this year, with 141 members currently registered. It costs $15 per year to be a member and $1 per person per activity. The surcharge helps pay for the use of the hall and equipment.
“We have an expensive bingo machine and the pool tables are also valuable,” said Nelson. “We are a non-profit organization and, while eligible to work the casino, with the popularity of them our turn comes up less often.”
The biggest change Nelson wants to see happen is “to change the misperception that Golden Age is a drop-in centre. It is most definitely not, although we do welcome visitors and for guests to take part in our activities.”