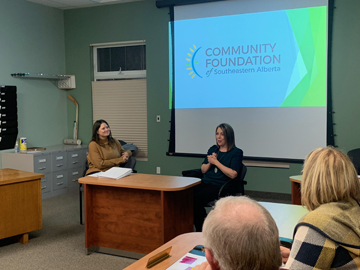 “Our mission to create meaningful connections between donors and charities for the permanent benefit of southeastern Alberta,” said Gray.

“We are a charity organization —non government, non-provincial— that accepts donations. But what makes us unique from other charities is that we don’t spend those donations, we invest them, and it’s from the investment revenue that we’re able to grant back out to charities across southeast Alberta.”

Since the Rural Community Fund of Forty Mile, which falls under the CFSEA umbrella,  launched in 2019, over $123,000 has been granted into the fund and has funded 23 projects.

““It’s amazing to think of the amount of funding that has been granted into the region since starting the Rural Community Fund of Forty Mile,” says Clint Thacker, Chair of the local Advisory Committee.

“With 23 local charities, non-profits and their related projects being supported with over $123,000 in grants received since 2019, we can easily see the impact of having our own local endowment fund. Being able to support such a diverse range of groups and projects, too, has been very rewarding for everyone on the committee.”

“Whatever it is, that’s what we’re here to do, is service the needs of everything,” said MacLean.

MacLean said they were able to pivot quickly with response to COVID-19.

The local region has seen $45,000 come in through the Spring and Fall Smart and Caring grants in 2019, the 2020 Spring Repurposing grant reeled in $5,000 for the Summer Fun Program and the COVID-19  Response Fund in 2020 brought in over $41,000 for service in response to needs during the pandemic.

Over $1.2 million that was granted in COVID-19 response funding  in 2020 between the Government of Alberta, Government of Canada and the Response Fund for CFSEA.

“Initially, I think we kind of felt that in our region, we weren’t really affected by COVID-19,” said MacLean.

“But as things started coming up and people needed to reopen, we were there with the grant support they needed to do that.”

The  endowment fund has now grown to over $40,000 for the Rural Community of Forty Mile .

“The more donations we receive, the more we know we will have a meaningful impact not only today, but forever, throughout the County of Forty Mile, said MacLean, “It’s been incredible to be part of seeing this initiative flourish in our county, and if this is what has been accomplished in just two years time, imagine where we will be another 25 years from now, and how many projects we will have all supported.”

CFSEA operates under the three pillars of grow, give and inspire.

The Foundation grows by accepting donations and depositing them into a pooled endowment fund— which currently sits at over $24 million.

Giving is done through various funding streams through a fall and spring grant cycle.

Inspiring is done through programming such as the Keep in Touch program at the beginning of COVID to help seniors and volunteers or those living alone.